Those of you who have been hanging around cellars too long like me start sliging around terms like, "sparge," "bulldog," and, "malo," all of us sounding like we'recelebrating some antiquated form of "talk like a pirate day."  I guess it's the way it goes no matter what industry or line of work you find yourself in.  Eventually you just start using terms that only make sense to a few of the people around you.

Well, I'm about to let you in on the secrets of MALO. 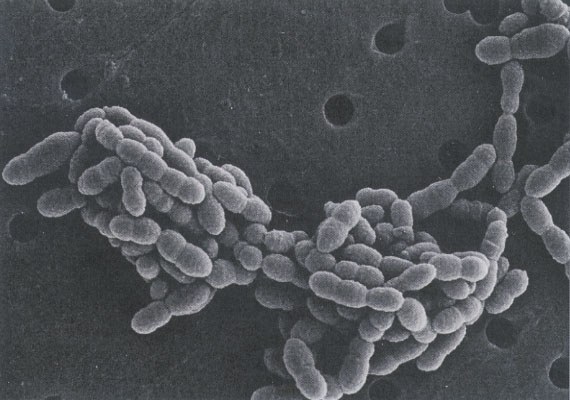 What we mean when we use the shorthand "malo," is "malolactic fermentation," which in itself is somewhat of a misnomer.  It's the conversion of malic acid, the tart acid found in abundance in apples and also grapes, into lactic acid, a softer tasting acid found in yogurt and other cultured dairy products.  This conversion is carried out by a diverse group of microorganisms known as Lactic Acid Bacteria [LAB].  There are a few major genuses - Pediococcus, Leuconostoc, Oenococcus, and Lactobacillus.  They all work to convert malic acid to lactic, but they tend to prefer different habitats, such as different pH levels, alcohol levels, and temperatures.  This is kind of analagous to if Neanderthals, and a bunch of other hominids lived at the same time as us, ate the same foods as us, but we all lived on different continents or in different climates.

While LAB are present at all stages from grape to wine, their populations tend to change and decline during fermentation, mostly due to some voracious giants called yeast.  (To a bacteria, a yeast is the size a mammoth would be to us.)  It's hard to get a foothold when you've got these collosal creatures all over the place eating all the food and giving off toxic substances.  This leads to a pretty large decline in LAB populations over fermentation.  And when all the sugar has been consumed and the last yeast cell dies in a pool of its own wine, what you're left with is an environment that isn't a particularly great place for bacteria to live.  It's pretty acidic, there's a high level of alcohol, and the yeast have generally eaten up most of the micronutrients necessary for life.  Only a few specially-adapted types of LAB survive.  Eventually, the dust clears, and the bacteria that are left start to build up their populations.

Of course, it doesn't always work like this.  If a wine isn't acidic enough, the LAB will start building up their populations before alcoholic fermentation finishes, and will start consuming the sugars that remain in addition to the malic acid, leading to off-aromas-- yogurty, spoiled milk smells, in addition to vinegar.

Another issue that can arise is a lack of sulfur dioxide after the malic acid is completely consumed.  If the pH is high and there's no added sulfur, certain strains of LAB will continue to consume constituent parts of the wine like citric acid and glycerol.  If the baceria start consuming the glycerol, it can lead to extremely bitter flavors in the wine.  If they start consuming citric acid, it can lead to high levels of a compound that tastes like movie-theater butter-- this is what is responsible for the buttery quality of certain Chardonnays.  At high levels, however, it can taste rancid.  And if they start to consume the tartaric acid present in the wine, it can turn the wine hazy.

But for the most part, the LAB do us a service in that they quietly and slowly do the work to turn what would otherwise be a rough and sour wine, and soften and refine it into something that we find much more palatable.  We don't let them do it in all wines-- some tartness is refreshing in wines like Pinot Grigios and Sauvignon Blancs-- but a high percentage do go through malolactic fermentation.  If you happen to be at the winery later this fall when our wines are going through malo, we'll let you give them a try and see what all the fuss is about.